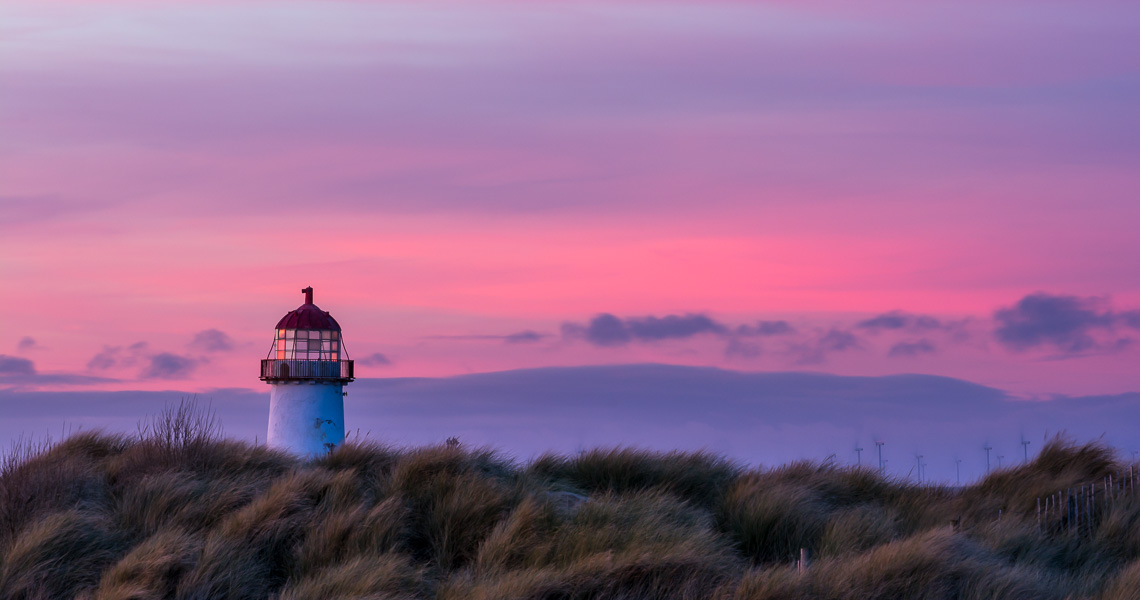 I spent most of 2019 photographing my local area, returning to the same places week after week. This year is going to be different! 2020 is going to be a year of venturing out, traveling further afield and seeking interesting locations. During my first weekend away I visited North Wales where I shot the Wepre Park Waterfall and Point of Ayr Lighthouse.

I recently shared how my weekend’s adventure started Saturday morning by shooting the Wepre Park Waterfall located near Connah’s Quay in Flintshire. The second location for my weekend of photography is the Point of Ayr Lighthouse located near the the village of Talacre in North Wales.

Where is the Point of Ayr Lighthouse?

The story behind the shot

The Point of Ayr lighthouse has been on my “to shoot” list for quite some time. The location is very popular amongst landscape photographers with many vlogs and social media posts featuring the lighthouse.

My initial plan was to shoot the lighthouse at high tide during sunrise on Sunday.  I had the vision of a long exposure with the lighthouse surrounded by soft silky water.  Upon researching tidal movements I found it was the wrong time of year for the shot. My research also convinced me that Talacre beach may be better suited to a sunset shoot rather than the sunrise I had in mind.

It pays to have one eye on the weather forecast at all times. I recommend paying particular attention to cloud coverage as well as the hight of clouds. My application of choice to track cloud is called “clear outside”. The app usually provides accurate results for high, mid and low level cloud coverage. Today my app reports zero low cloud and around 70-80 percent high cloud. This usually gets me excited and makes me rather optimistic that a sunrise or sunset will usually be pretty colourful.

I arrived at Talacre villiage around 15:30 with time to spare to find a good composition. The sky was pretty cloudy and appeared to be nothing special. I started to have doubts about the colourful sunset which I had self predicted a few hours earlier.

Quite a few families had headed to the beach this afternoon. The lighthouse was continually surrounded with people climbing on the rocks and surrounding steps. Quite a few having stopped to pose for their own instagram selfies or such like images. I paced up and down the beach hastily looking for a suitable composition. Following a short walk we decided to call it a day and made my way back to the car.

A sudden burst of colour

As I walked towards the car the sky began to explode with colour. Knowing I didn’t have time to return to the beach I decided to see if I could make pictures from a nearby viewing platform. My heart began to race as I filled with excitement. Adrenaline pumping through my veins I Instantly knew what was going to happen. I quickly set up my tripod and pointed the camera towards the setting sun.

Shooting directly into the sun can always be a challenge. I find it difficult to get the exposure right first time. My cameras metering system often gets confused due to the dynamic range and brightness of the sun. Shooting a few test shots is usually the answer. You have to be quick with this kind of light as levels can change rapidly.

Test shots complete and I was ready to shoot. Over the following 5 to 10 minutes light levels decreased considerably with colours enriching as they spread across the sky.

I usually find the best colours present themselves around 20 minutes or so after the sun has dropped below the horizon.

Most people do not realise I created the below image during the same sunset shoot as the image above. In fact I made the two images just one minute apart!

Rotating the camera an angle of around 90 degrees to the sun has has allowed me to capture a totally different colour tone and a considerably softer light. I captured this image by exposing for the sky and slightly lifting the shadows in Lightroom to bring back any detail I had lost In the windswept foreground.

Shoot RAW and expose for the highlights. When a highlight becomes blown out and rendered as pure white it is impossible to recover any details from these pixels. Shadows tend be a little bit more forgiving as it is possible to lift and tease out details from darker areas of an image. Raw files also capture an immense amount of detail compared to Jpeg files so for this reason I always shoot Raw and enjoy considerably greater control during post processing.

Last nights sunset was amazing and without a doubt one of the best sunsets I have ever witnessed. I decided to stay with my original plan and return for Sunday morning’s sunrise.

I like to arrive around an hour before the advertised sunrise time. Similar to sunset colour usually appears around 20 minutes before the sun breaks the horizon and can often be the best light to shoot in.

This morning I was running a little later. It was already starting to get light when I arrived at the beach and to my surprise there was already 5 photographers in position with tripods set up waiting for the light to break. This morning was quite cloudy so there was plenty of scope for drama in the sky and a fair amount of colour.

The shot that almost escaped

Trying to capture the above composition yesterday would have resulted in failure. The beach was way too busy. I expected the water to be closer to the lighthouse as high tide had been around 5am. I guess the tide didn’t rise too far in the first place as there were still visible footprints from the previous day. This is where a bit of local knowledge would have come in handy. The ability to drop in on a location several times and have a better understanding of the conditions defiantly has its benefits..

Is golden light too much to ask for?

Whilst I was capturing the above image the clouds behind me began to reflect with golden light. Hindsight is a wonderful thing! I should have been wearing wellington boots. Inexperience has caught me out again and I needed to walk around the tidal pools to reach where I wanted to be. Finally I made it to the other side of the lighthouse, set down my tripod and composed this wonderful image.

The golden light faded rather quickly, with the sun rising higher into the sky. I decided to try my luck with a lighthouse reflection into a tidal pool. Tidal pools are pools of water left behind as the ocean recedes at low tide.

Self critique to improve

Most photographers have their opinions about what they would do differently or how they would improve an image. After all art is very subjective and will not always please everyone all of the time.

Self critique is different. For starters I know how and why I captured the image. I also know what equipment I used and the challenges I encountered. For the above image I feel the following critique apply.

X – The top of the lighthouse reflection enters the ripples in the sand. I could combat this by raising the camera but this was not possible as my tripod was at it’s highest setting.

X – The patch of stones on the right is messy. Moving a few feet to the right would have eliminated this from the composition.

Having an L bracket attached to my camera makes it easy to switch between landscape and portrait orientations whilst using my tripod. The below image is a similar composition shot in portrait mode. Whilst composing the shot I didn’t see the semi circle of rippled sand and feel the composition could have been improved by pacing the top of the lighthouse reflection within this area. All I would have needed to do was take a couple of small steps to the side and raise the camera slightly. I know easier said than done!

After spending time shooting sunrise and sunset at the Point of Ayr Lighthouse I defenatly prefer the images I made at sunset. Although I didn’t make an image showing the full lighthouse I preferred the tones and colours sunset provided. The image of the lighthouse peeking over the sand dunes is my personal favourite and will most likely feature in my selection of best images for 2020.

Don’t forget you can also connect with me on Instagram and Facebook where I will be sharing a selection of images from my recent adventures.

Make sure you don’t miss out on my next adventure by signing up to the blog. All you have to do is enter your email address below and I’ll send you a short email letting you know when a new post live. It’s free and you can unsubscribe at any time.

Matt Boxley
Matt Boxley is a freelance photographer from the United Kingdom. Matt purchased his first DSLR in April of 2014 and soon caught the photography bug. Matt now continually fight's the battle within himself to create the "perfect picture" 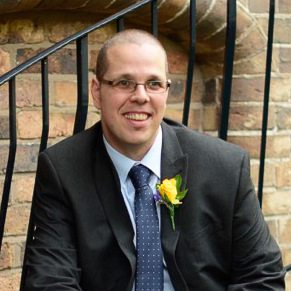 Welcome to the blog. I am a photographer from Birmingham, England and want to share my photography adventure with you.  As the blog continues to grow I will provide resources, hints, tips, reviews & how to guides. I will also share a selection of my images to inspire and ignite your own photographic journey.  To find out more about me please visit: About Matt Boxley

Dudley Castle hiding within the snow clouds as the

"Hut In The Woods" From one of my walks in August

Lake Vyrnwy is a reservoir in Powys, Wales, built

When frost meets fog at midday. Proof that it’s

I have 2 rose bushes in my garden that continually

Happy New Year! This time last year I had already

This is my third and possibly final shot I am goin

The bench of dreams surrounded by a sea of thick f

A foggy sunrise shoot on top of the sheep walks ap

I consider myself more of an early riser and those

This week I visit my local woodland during a shoot

This site uses functional cookies and external scripts to improve your experience.

This site uses functional cookies and external scripts to improve your experience. Which cookies and scripts are used and how they impact your visit is specified on the left. You may change your settings at any time. Further details can be found in our Privacy Policy

NOTE: These settings will only apply to the browser and device you are currently using.

This website serves non personalised advertising by Google Adsence and its partners to users within the EEA. You may see ads that are less relevant to you. These ads use cookies, but not for personalisation.

This website uses tracking software to monitor its visitors to better understand how they use it. This software is provided by Google Analytics which uses cookies to track visitor usage. The software will save a cookie to your computers hard drive in order to track and monitor your engagement and usage of the website, but will not store, save or collect personal information. You can read Google’s privacy policy here for further information https://www.google.com/privacy.html